A neck operation called an anterior cervical discectomies and fusions (ACDF) is a very common surgical procedure. It is generally safe, effective, and expected to return you to normal activity within a few weeks after surgery. It is an approximately one hour procedure, done as an outpatient or as an overnight stay in the hospital. Below is a guide to the procedure that I hope you will find helpful.

PREPARATION FOR SURGERY: You will be asked to shower using a special soap, the night before or the morning of the surgery. It will be given to you by the hospital at your pre-operative evaluation. You should not eat or drink anything after midnight before surgery. You will be instructed if you need to stop any medications prior to your surgery by our office staff.

THE PROCEDURE:  Once you enter the Operating Room, you will be given an intravenous medication. This will put you deeply asleep, and you will remember nothing of what occurs afterwards. The procedure takes approximately an hour, after which I will contact your friends or family. From the time you are wheeled back to surgery to the time I come out to speak with your friends or family is about two hours.

The procedure starts with a small incision to the right of your Adam’s apple. The incision is almost always on the right side, regardless of which arm or which side of the neck hurts. I attempt to put the incision in a skin crease, so that 6-12 months after surgery it is often not visible. Your disc has been disrupted, and it is standard practice to remove it entirely. The operating microscope is used to perform all dissection near the nerves because that allows the operation to be done very safely, in a minimally invasive manner. 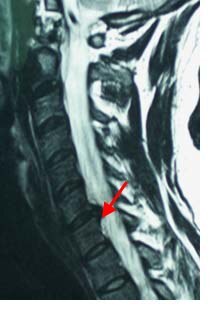 The next portion of the procedure is called the fusion. The discs in the body are named for the bones they are between. For example, there are seven bones in the neck, and if your disc rupture is between the number six and number seven bones, it is called the “C67 disc”. The goal of the fusion is to make the C6 and C7 bones into one bone. This is done by taking a piece of bone from our tissue bank and sliding it between the two after the disk has been removed. Over many months, the bones will heal together as one. Many people worry that taking a piece of bone from someone else presents the risk of getting either hepatitis or AIDS. Although this is theoretically possible, I have not heard of a single such case in over 30 years of practice, and the chance of contracting such an illness is less than one in tens of thousands. Your body’s own bone cells will soon begin to replace this bone from the tissue bank. Many people also worry that the fusion will decrease your ability to move their neck. There will be no change in your neck motion that you can notice.

After the fusion, I usually place a plate over the disc and two bones. The plate is made out of either plastic or metal. It is extremely small, and is about the size of half a postage stamp. Plastic or metal screws will go into the bone above and below, to keep it in position. These plates have become extremely popular in recent years for a number of reasons. The main one is that they eliminate the need to wear a collar after the surgery. In addition, they allow a very rapid return to work. This is usually within a few weeks regardless of your profession.

Following this, the incision is closed. We no longer use stitches in the skin. Instead, a surgical glue is used, which will dissolve over a couple of weeks. For weeks to months afterward, the incision will appear as a very thin and perhaps purple line. In some people, it is more prominent than others. In general, between six months and a year after the surgery, it will be difficult to see the incision at all.

BENEFITS: This is one of the most satisfying and reliable operations that I perform. Many people have severe arm pain before the procedure, and the expectation is that this will be gone immediately after the surgery in the Recovery Room. Not everyone improves that quickly, but most people do. The strength will generally return quickly in a matter of a few weeks. Numbness is the least predictable in regard to recovery, and you may have some numbness in the hand or forearm for months.

COMPLICATIONS: An ACDF is a very safe procedure. In the medical literature, the risk of a serious complication such as a spinal cord injury is under one half of 1%. I have performed over 1,000 of these procedures for over four decades. The risk of an infection is also under 1%. The chance of the bone not fusing is in the range of 4%. The risk of hoarseness is very rare. There are some specialists that believe that a fusion causes increased stress at the spinal levels above and below. This might lead to another herniated disk, or excessive bone spur formation. I have not found this to be a problem in my patients.

AFTER THE SURGERY: You are always free to contact me in the office or through my answering service. In general, you will be seen about 2 weeks after the surgery, to check the incision and to make sure that all is healing well. 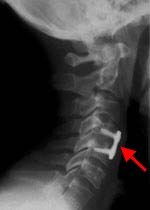