PATIENT GUIDE TO THE GAMMA KNIFE

WHAT IS A GAMMA KNIFE?
The Gamma Knife is a machine that focuses a very large amount of radiation on a small part of the brain in order to shrink or destroy that area. This is not surgery in the usual sense of the word. There are no incisions and it is, in a sense, surgery on a lesion, without surgery. 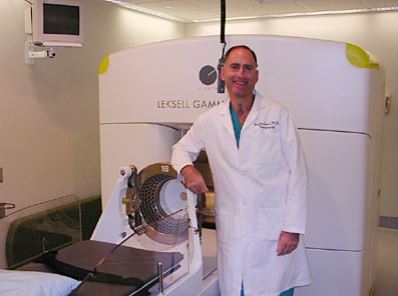 HOW DOES THE GAMMA KNIFE WORK?
The best way to understand the Gamma Knife is to imagine an entertainer on a stage in Las Vegas. When the entertainer first comes on stage, the room is entirely dark. Then the spotlights are turned on, and all intersect on the entertainer. He or she is brightly illuminated, and all around is extremely dark and can barely be seen. The Gamma Knife works on a similar principle except instead of spotlights, there are 201 pencil-thin “spotlights” of radiation. The spotlights are between 4 and 18 millimeters in diameter, and all intersect precisely where we want in the brain with a precision of less than 1 mm. The intent is to have these beams intersect at the lesion in your brain that we want to treat; the normal brain structures around the lesion receive an insignificant amount of radiation.

PREPARATION FOR THE GAMMA KNIFE
There is little you need to do to prepare for the Gamma Knife. A few days before the treatment, you are invited to come to the Gamma Knife Center, at which time you will be given a tour of the unit. They will familiarize you with the surroundings so that on the day treatment, all will go as comfortably and smoothly as possible. 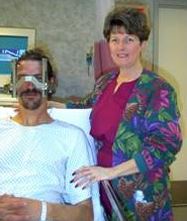 THE DAY OF THE GAMMA KNIFE TREATMENT
We usually ask that you arrive at 6 AM on the day of treatment so that you can be admitted to the hospital, and fill out the usual forms. You should not eat anything the day of the Gamma Knife, but please take all your usual medications with a sip of water upon leaving for the hospital.

You then are taken to the Gamma Knife unit. Beverly Ponte and one of the doctors will put a metal device on your head. This takes about 5 minutes, and is called a Leksell frame. It allows us to control the motion of your head so that the area we wish to treat can be precisely moved to where all the beams in the Gamma Knife intersect. The Leksell frame attaches to your head with one-inch metal posts. We start by injecting the scalp in the forehead and behind the ears with Novocaine. We may put a small gauze pad over your eyes to prevent any irritation should the Novocaine drip into them.

These metal posts advance to those anesthetized areas, and put pressure against the scalp and head. Putting the Novocaine in is unpleasant, but this only lasts for a few seconds. When the Leksell frame is securely in position, you can expect to feel pressure for about 15 minutes, and then it should be comfortable and cause you little discomfort. You will be transported over to the MRI unit that is just down the corridor from the Gamma Knife Center.

The MRI study often takes as long as an hour, so sometimes we will give you some sedation to enable you to sleep through it. After this, you go to your room where you can read, watch television, or take a nap.

PREPARATION OF THE TREATMENT PLAN
In the next several hours, the images from the studies are transferred through the communications network to the Gamma Knife planning computer. Dr. Saris and the physicist then make the treatment plan.

Once the treatment plan has been finalized, you will be transported to the Gamma Knife unit. You’ll lie on the treatment table and the gamma knife frame is used to maneuver your head into what is called the Gamma Knife helmet. It is securely attached and everyone except you will leave the room. You have a microphone and can talk to us at all times. There is music playing to help pass the time. You may bring your own music, and we will be glad to play it for you.

For each gamma knife treatment, the bed you are on will slide into the Gamma Knife unit itself, and your entire body and head move up a foot or so to engage with the radiation part of the unit. Undergoing the gamma treatment is very much like undergoing an MRI. The table moves you about, but nothing appears to be happening otherwise. The radiation is odorless and colorless, and you will feel nothing at all as you are treated. Each treatment lasts for a few minutes as the radiation is directed to different parts of your lesion, but occasionally will last longer. We will tell you what to expect for each one.

The typical treatment takes between 30 minutes and two hours. When the last treatment has been done, the Leksell frame is removed. The areas where the metal rods posts have come in contact with the skin can be little tender, but once they are removed should cause only a mild to moderate ache. We will put Band-Aids on those areas, and may put a small ACE wrap on your head for an hour or so.

When this has been completed, you’ll go back to your room for observation. You can have something to eat that afternoon. Then, if all goes well, you’ll go home later that day.

My office will call you in regard to being seen again, and we will arrange more MRIs as needed. In general, the first MRI is either two or six months after the treatment.

A helpful Web site to look at is www.elekta.com. This is the company that makes the Gamma Knife. It will give you helpful links to many other sites. Feel free to contact me at ssaris@bwh.harvard.edu.