PATIENT GUIDE FOR A VENTRICULOPERITONEAL SHUNT

INTRODUCTION:  This is a guide that I hope you will find useful about your upcoming surgery.  A “shunt” is a device that allows fluid to travel from the central part of the brain into your abdomen. In general, it is a safe, 45-minute procedure that, in most cases, does not even require admission to the hospital. However, we would like for you to read the below information carefully. 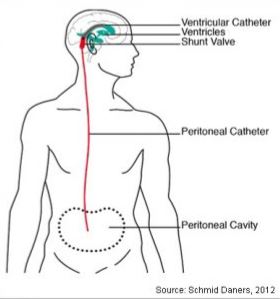 PREPARATION:  You will be asked to shower using a special soap, the night before or the morning of the surgery. It will be given to you by the hospital at your pre-operative evaluation. You should not eat or drink anything after midnight before the day of the surgery. You will be instructed if you need to stop any medications prior to your surgery by our office staff, and which medications to take the morning of your procedure, by the nurse at your pre-operative appointment.

THE PROCEDURE:  When you come into the Operating Room, you will first enter the Holding Area. You will meet the nursing staff, the anesthesia staff, and have an intravenous placed.  You will then be transported to the operating room, at which time you will be give medication to put you to sleep. You will feel and remember nothing of the procedure.

After you are asleep, a small area of hair will be removed from just behind the hairline on the right side, down behind the right ear, and down the right side of the neck toward the collarbone. This generally can be combed over immediately after the surgery, and should grow back quickly regardless.

A curved incision is then made an inch or two behind your right hairline. It is a small incision and similar to cutting halfway around a quarter. A small hole is made in the skull about the size of a dime. A tube about the thickness of a piece of spaghetti and the length of your little finger, made of a rubber-like material called silastic, will be passed into the brain into what is called the “ventricle”. The tube is then guided (underneath the skin)

behind the ear, over the collarbone, and down the front of the chest, towards the belly. We will make another small incision on the right upper abdomen. This is about allows us to put the tube into your belly where the brain fluid is reabsorbed. The scalp incision is closed with staples and the abdominal incision is closed with a surgical glue. The shunt is completely underneath the skin and, in general, not visible once all has healed.

After the procedure, you will spend a short time in the Recovery Room.  A precautionary CT scan may be obtained. Apart from some moderate aches and pains where the procedure was done, you will in general feel the same as before surgery. The decision on when you return home is made between you, your family, me, and the anesthesia staff. While in most instances it is safe to return home the same day, we may keep you overnight due to concern about internal bleeding.

RISKS OF OUTPATIENT SURGERY: During my years of surgical training in the 1980s, the standard of care was to remain in the hospital for several days after this operation. However, as anesthesia has improved, and as the operation has become less invasive, many surgeons have begun performing this as an outpatient. We generally send patients home shortly after these procedures. However, like any medical decision, there are benefits and risks.

The benefit is the simple advantage of being in your own home and bed to recover from the operation. Any pain medication you might receive via an intravenous in the hospital, you can take as easily by mouth at home. The main risk is a 1% risk of internal bleeding or swelling after the operation. In the brain this could cause either a seizure or stroke, and either can cause death. If the CT scan performed after the surgery shows nothing worrisome, we have felt comfortable sending patients home, and have not had any problems treating patients in this manner.

It is your option to remain in the hospital or return home after your surgery. I recommend returning home, and waiting until at least 11pm before going to sleep. If there are any problems, call an ambulance or come immediately to the emergency room.

BENEFITS:  The purpose of the shunt is to relieve the pressure caused by the buildup of fluid inside of the brain. In general, approximately 80% of the time you will feel much improved after the procedure. You will think and walk much better. Approximately 20% of the time you will feel no different. It is important to note that it takes 3 months to determine whether or not this surgery will be helpful to you, though many people feel better instantly. 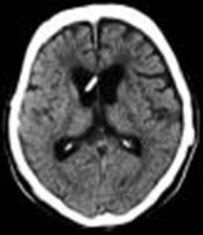 You have a new generation of shunt that can be slowly programmed.  Initially, the shunt is programmed to a setting in which it is barely draining.  Your first postoperative appointment is 2 weeks after surgery.  If you are doing well, the shunt will be reprogrammed, in order to allow more fluid to drain.  You will be seen 1 month later, and then as needed, in order to make additional adjustments on your shunt setting.  We will do a CT scan to see whether the fluid chambers in the brain (ventricles) have gotten smaller, and if the shunt  is in good position. We continue until either (1) you feel much better, or (2) we reach the lowest setting of the shunt. This takes 3 months, after which time we will know if it has worked or not. 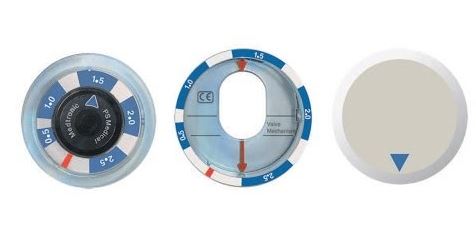 Components of the shunt pro. It takes seconds to put the shunt at the correct setting https://www.youtube.com/watch?v=qydh-bZHQbQ

COMPLICATIONS: In general this is a safe operation. There are three main complications, all of which are rare. The first is infection, which is the risk of all forms of surgery. In my hands, the risk is approximately 2%, and if it occurs, the shunt usually needs to be removed. On occasion, the shunt can become blocked. This also happens very infrequently and if the shunt has been helping you, the part that is blocked would be replaced.

The problem that is most worrisome, but also quite rare, is internal bleeding after the shunt placement. The brain is under pressure because of the excess fluid in its center. When this pressure is relieved, there can be tearing of a small vein on the surface of the brain causing what is called a subdural hematoma. This can be quite serious, and if the subdural hematoma is large, it would require return to the operating room for its removal. This requires what is called a craniotomy. We have not had to do this in many years.

Either the physician assistant or I are always available, 24 hours a day, 7 days a week, if there are any questions or concerns after your surgery.